While organic expressions only account for five per cent of the world’s wine output, there are incredible – and often affordable – bottles to be had in all categories, as Patrick Schmitt MW discovers. Read on for our analysis of the organic wine category and the results from this years’s competition in full. 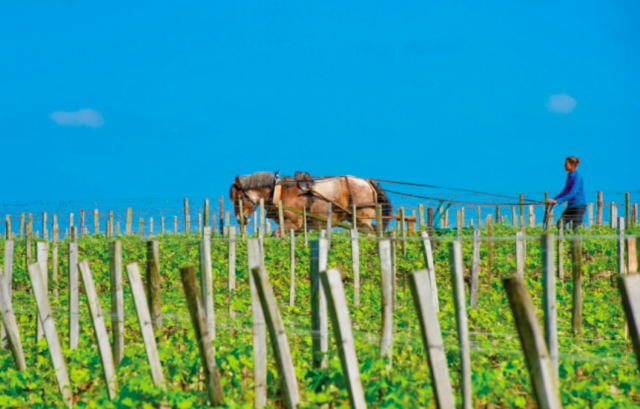 There’s a perception among some consumers that going for organic may be limiting one’s options in the wine category. To some extent that’s true – organic wine represents less than 5% of global wine production, even though the agricultural method is in the ascendance. But as the 2020 Organic Wine Masters showed clearly, you can now find an organic version of every style of wine, including the mainstream categories. Indeed, we had organic Prosecco, Marlborough Sauvignon Blanc, Australian Chardonnay, Provençal rosé and Rioja – to name just some of the world’s best-selling wine styles.

There’s another preconceived notion regarding organics, however, although it’s diminishing. This concerns an idea that the organic alternatives of best-selling wine styles are lesser versions. Again, this is something that this year’s Organic Wine Masters proved to be unfounded. The certified organic samples in the famous categories mentioned above were all outstanding, benchmark wines. Finally, there’s a belief that organic wines may be as good as equivalents made using conventional farming techniques, but are much less good value. Once more, this was shown not to be the case. Although we were tasting only organic wine, and therefore not comparing the category with equivalents made by conventional winemaking methods, because we assess so much wine through our Global Masters programme, we have a good sense of the quality-to-price ratio in all the key styles. And, to our surprise, organic wines are able to deliver a lot of wine for the cash. We had class-leading samples in this tasting at entry-point prices. Why should this be a surprise? Quite simply because organic farming techniques generally produce lower yields and require more labour, making an organic wine around 20% more expensive to produce, on average.

So, with that general assessment of the category as its stands today, let’s look at the highlights that led us to form the conclusions above.

Extraordinary value
Initially, the sparkling flights proved home to some of the most exciting wines of the blind tasting. If there were one type of fizz that stood out for extraordinary value it was Cava.

Somehow, this traditional method sparking wine, even when made according to organic strictures, managed to yield creamy, bready, fruity-tasting results at bargain prices.

So, where you see Golds for sub-£10 fizz, it’s because these wines were the best of their category, and therefore awarded the top medal relative to their peers. Whether it was the inexpensive wines from Cava Pata Negra, Cava Jaume Serra or Cava Contevedo, there was so much character for the cash, and it was organic. Such wines served as a reminder to us all not to forget Cava when asked to find inexpensive fizz for parties or celebrations.

Moving up the pricing scale, Cava again performed brilliantly over £15 with Vilaurnau’s organic limited edition version, although here too we had a deliciously fruity fizz, albeit in a more aromatic and gently sweet style, with Maschio’s Prosecco DOCG.

Over £20, and we had some interesting stars. One was a lovely baked apple-and pastry-scented sparkling from England’s Davenport Estate, while another was a top DOCG Prosecco from Masottina, and a third was a pink fizz, again from England, this time from the first-rate Oxney Organic Estate.

Going up further in price, we had remarkable organic Champagnes from Drappier, above all its Quattuor Blanc de Quatre Blancs, which employs the full four white grapes of Champagne, including Arbane, Chardonnay, Petit Meslier and Pinot Blanc. This makes this fizz particularly special, as it provides a home for the historic, near-forgotten grapes of Champagne, while supporting organic farming, which is a relative rarity in the region. It also helps that this high-quality output hails from the region’s most sustainable producer – Drappier is carbon neutral.

Among the still wines, starting with the cheapest whites, there was plenty to prove that you don’t need to turn your back on organic wines when you’re on a tight budget. While we did not quite reach the Gold standard under £10, we had plenty of delicious drops that we can recommend. Italy and Spain were notably strong sources of good-value organic whites, including those from the former’s Masso Antico, Corvezzo and Rallo, and the latter’s Bodegas Luzón. But we also had a powerfully scented and pristine Torrontés from Argentina’s Santa Julia.

Moving over £10, there were some outstanding whites, including a typically pungent Sauvignon Blanc from Marlborough’s Darling Wines, a peachy drop from Sicily’s Santa Tresa, along with a waxy white from the same Italian island, this time from Azienda Agricola Cortese, then a nutty, peachy classic Chardonnay from Australia’s Angove Family Winemakers.

Then, at the very top of the organic white wine quality pyramid in this year’s competition was an oily, barrel-fermented blockbuster from brilliant biodynamic stalwart Château Maris in Minervois. We’ve given top ratings to this producer’s Syrah and Grenache red blends in the past, but this year, it was the white wine that we sampled, and wow, it’s good.

Sticking with the more refreshing end of the tasting, following the fizz and white wines, we had a few organic rosés to try, with two proving notable, including a lovely fresh, pale, strawberry-scented sample from England’s Albury Vineyard, then a moreish and delicate white cherry-tasting pink from Provence’s notable organic-only estate, Château Léoube – a benchmark rosé that’s also organically produced.

Similar to the first part of this tasting, there was great diversity in the reds, and, also like the organic whites, at entry-point prices it was Italy and Spain that dominated among the medal-winners. Among these was a delicious cherry-loaded Negroamaro from Masso Antico and a range of first rate, powerfully tannic reds from Jumilla employing the hardy Monastrell grape, while among

the oak influenced bargain reds was a barrel-fermented Tempranillo from Spain’s Finca Constancia – a remarkable find for anyone wanting a red rich in red fruit and vanillin, but with little money to spend.

More great wines featured from Château Maris, complete with layers of red fruit and spice, while we also saw a pair of stars from Chile, both from two of the country’s top organic and biodynamic estates, Vermonte and Emiliana. Although quite pricy, I particularly recommend the latter’s underrated icon red called Coyam, which, unusually for Chilean fine wines, is dominated by Syrah, rather than Cabernet Sauvignon.

While the highest-priced reds also saw some great Monastrell-based wines from the aforementioned Jumilla – producers Alceno and Parajes del Valle – it was Australia that dominated the top scorers.

As you can see from the Masters, which are awarded for the very best examples of the category, it was Gemtree, Angove and Kalleske that wowed, representing the McLaren Vale and Barossa regions. Making such wines remarkable were very old vines, primarily Shiraz, that yielded concentrated black fruit flavours, with a peppery interest, and a cool minty edge. Not only that, but such characters had been complemented by the cream and cocoa flavours of maturation in barriques, to create something complex, indulgent, and, while delicious as a young wine, something with great ageing potential too. It was pleasing to think that such producers were doing great work capturing the essence of historic vineyards while managing them without the use of synthetic inputs. At the same time, these wines highlight the quality available from Australia’s old vine

Shiraz – while also representing relative good value compared with the prices of fine wines from famous European wine regions, along with those from certain parts of the United States.

While this tasting is only a snapshot of the global organic wine category, it does serve to highlight the range of bottles on offer in this sector, as well as draw attention to the greats championing this worthy approach to vineyard management and wine production.

The Global Organic Masters is a competition created and run by the drinks business, and forms part of its successful Masters series for noble grape varieties, such as Chardonnay and Pinot Noir; major wine styles, from sparkling to fortified; and famous regions including Rioja, Champagne and Tuscany. The competition is exclusively for organic wines. The top wines were awarded Gold, Silver or Bronze medals according to their result, and those expressions that stood out as being outstanding in their field received the ultimate accolade – the title of Organic Master. This report features the medal winners only.