Our inaugural Asian Sparkling Masters was a sure sign that Champagne, the holy grail of sparkling wine, is still the crème de la crème of all fizz and unapologetically reigns with its rich tradition, layers of complexity and razor-sharp precision in the winemaking process.

To put it in perspective: Champagne alone is responsible for producing all five of the Master medal winning wines, the top accolade of our competition, which is awarded only to wines that have been unanimously scored 97 points or above by the judges. In addition to sweeping all the Masters, Champagne dominated the gold medal chart nabbing seven out of the eight awards given out. 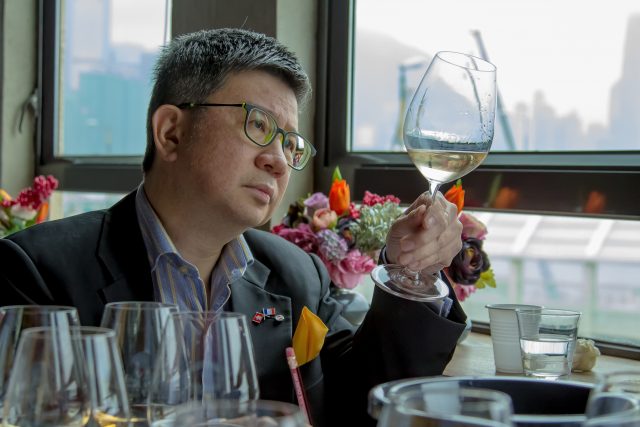 Compared with other sparkling categories, its association with good times, zippy acidity and complex aromas cut through the competition and was ultimately rewarded with the biggest medal haul. “For this inaugural Asian Sparkling Masters, the entries were overall of high quality. The top houses showed well, proving their consistency,” Yu-Kong Chow, independent food&beverage consultant and wine judge, commented.

The region, encompassing 34,000 hectares of vineyards, sold more than 307 million bottles worldwide last year, and the lure of the frothy bubbles is expected to grow as demand from emerging markets is set to accelerate.

The Asian Sparkling Masters is a competition created and run by the drinks business Hong Kong, and is an extension of its successful Asian Masters series. The competition is exclusively for sparkling wines and the entries were judged by a selection of experienced tasters including Hong Kong’s top wine buyers, sommeliers and consultants. The top Sparklings were awarded Gold (93 points or above), Silver (89 points or above) or Bronze (85 points or above) medals according to their result, and those Sparklings that stood out as being outstanding received the ultimate accolade – the title of Master (97 points or above). The wines were tasted over the course of a single day on 30 January, 2018 at Hip Cellar. This report features only the medal winners.

One of the top performers was Taittinger’s premium cuvée – Comtes de Champagne Blanc de Blancs – made with Chardonnay from six of its grand cru sites. The 2006 vintage was reflective of the year’s fine integration and expression and scored 97 points, landing it the coveted Master title.

“It is a fine example of an excellent Champagne with its seductive delicate floral aroma, rich complexity and the balance of beautiful acidity. It ticks all the boxes,” declared Chow.

Moving down from the price ladder, Champagne Lanson Extra Age Brut and Champagne Barons de Rothschild Brut – both in the HK$400-799 bracket – were equally impressive. The Rothschild Blanc de Blancs was a favourite among a couple of judges, and is believed to be more expressive than the Champagne house’s vintage 2008 cuvée, which carries a heftier price tag (Above HK$800).

“It actually shows even better than the vintage 2008 version – not to say the latter isn’t good it just wasn’t within its drinking window yet, thus it appears a bit more closed than the brut version,” commented Anty Fung, general manager of Hip Cellar.

Eddie McDougall, the Flying Winemaker, is another judge that gave a firm vote for the fizz, calling it “a classic”. He added: “I admired the elegance which was well supported by the complex layers induced by the methode traditionelle techniques.”

Lanson’s Extra Age Brut NV, a tri-vintage blend of Chardonnay (40%) and Pinot Noir (60%), landed a Master for its weight, length and balance. Different from most of our Master series competitions, with sparkling wines, notably Champagne, price tends to directly correspond with quality – as opposed to Shiraz, for instance, where it’s not uncommon that out-liers can sometimes outperform pricier samples. 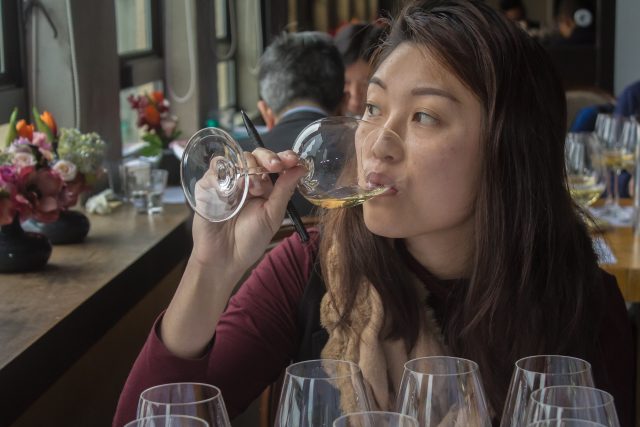 The former from the torrid, frost-bitten and sun-scorched 2003 vintage, which saw the majority of Champagne houses forfeiting declaring a vintage, showed classic autolysis aromas and plenty of personality. “Its great complexity and length won me over, as were its great toasty and nutty characters,” exalted Chow. The Champagne R&L Legras Brut from Chouilly, the famous and most northerly village of the Côte de Blancs, meanwhile is a good example of precision with a dosage of 7 g/l. 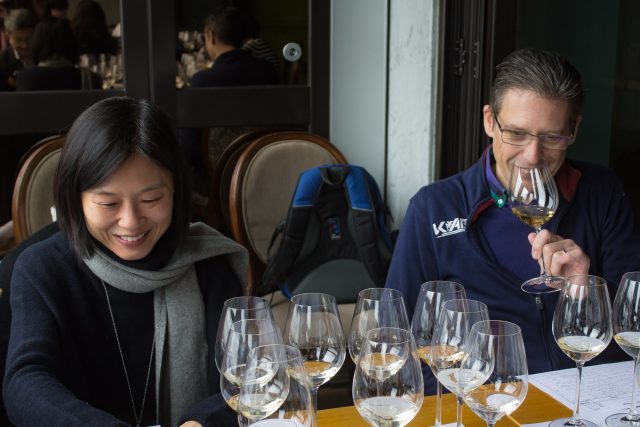 Gramona’s vintage Cava is the only other non-Champagne sparkling wine that managed to break Champagne’s choke-hold at the top of the medal charts. The 2012 Brut, a blend of local varieties Xarello and Macabeo, impressed the judges with its quality considering its accessible price tag (HK$200-299).

But with pleasing samples, there were a few cases where excessively green fruits, oxidation and cork taint made the judges scrunch their noses and turn their head away.

“Overly oxidative, which I believe may be a problem during the vinification when the producer ferments base wine in the barrel to increase contact with oxygen. If not done properly, it may create some unpleasant aromas in the sparkling wine,” commented Derek Li, chief sommelier of Duddell’s. “On the other hand, some sparkling wine showed intense green notes. This may be related to the overall unripeness of the grapes themselves.”

One of the trends on the lips of producers and consumers nowadays is a move towards lower dosage.

“The recent trend is going for lower dosage sparkling especially in grower Champagnes. This is closely tied with consumers’ pursuit for single vineyard, special Cuvée, more premium examples of grower Champagne. They don’t need low or even any dosage in order to show balance, harmony and complexity,” commented Fung.

Even contrary to popular convention that Chinese drinkers favour a more generous touch of sweetness, in more mature markets like Hong Kong and Japan lower dosage and zero dosage are much sought-after. “The standard of four(ish) g/l I think works well. I don’t believe Asia in particular looks for more sugar: my experience of top quality sparkling is that consumers appreciate in the same way as elsewhere,” Stockman noted. 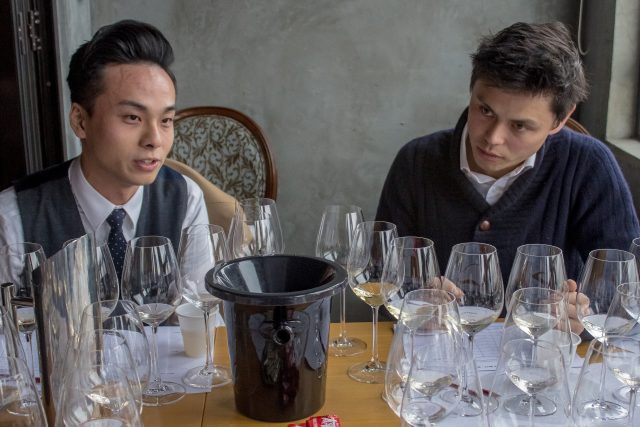 This was echoed by Chow: “I think the more sophisticated segments of the Asian markets like Hong Kong seem to be following this flow with even zero dosage sparkling wines in vogue.”

In the on-trade sector in Hong Kong, not only are drier styles of wines attracting consumer interest, German grower Sekt, other premium New World bubbles and English sparkling wines are also piquing interest from consumers, Fung observed based on her on-trade experiences.

This doesn’t mean sweeter versions of sparkling wines are pushed out of the market. Outside Hong Kong and Japan, most drinkers in mainland China and other Southeastern Asian countries still prefer a higher content of dosage. “Hong Kong and Japan are sophisticated markets, preferences are generally towards refreshing and savoury styles. As you move into Southeast Asia a higher level of sweetness is preferred. China is still learning about the intricacies of sparkling wine so it’s still undefined as to what their preference are,” McDougall suggested.

Moving towards higher dosage category, above 12g/l, in our competition one of the more commonly noted drawbacks is their overtly cloying and unbalanced sweetness. When the scale tilts too much towards sugar, the wine’s overall balance is sacrificed without the backbone of acidity.

“It’s when sweetness isn’t balanced, then you have a problem. The wine will become cloying, less refreshing thus less appealing to drink,” commented Francesca Martin, founder of BEE Drinks Global, adding that a Silver-medal winning Asti from Diama was a fine example of achieving balance between sweetness and acidity. 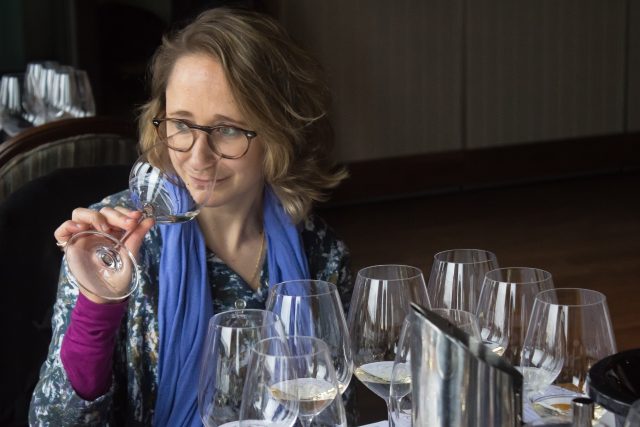 It’s safe to say that with Prosecco’s growing global popularity, we’ll be sure to see more samples from the region climbing up the medal chart either for drier samples or in higher dosage category. Global sparkling wine consumption is forecast to grow by an average of 2% year-on-year through to 2021, and Prosecco is undoubtedly in the driving seat, according to the latest joint report by Vinexpo and IWSR. By then, Prosecco’s growth will far outstrip other major categories such as Champagne and Cava.

You can scroll over the pages to see the full results.