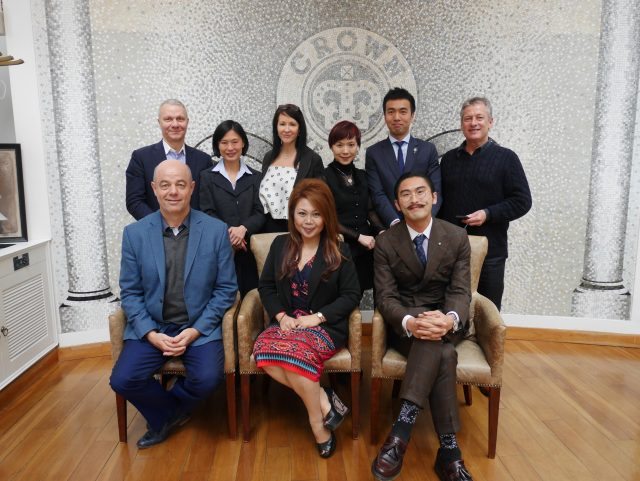 The results affirmed that Australia, Chile, Argentina and the US have come of age in crafting first-rate pure Cabernet Sauvignons and Cabernet-dominated blends that display the typicity of the grape variety, characterised by high tannins, juicy blackcurrant flavours and spicy peppery hints. Different from delicate Pinot Noir, Cabernet regardless of its growing regions and climates, is famous for its ability to show this typicity without fail.

“Cabernet Sauvignon is no doubt a benchmark grape variety in the same way Chardonnay is for whites. Made all over the world, one can enjoy an entry-level Cabernet or high-end Bordeaux or California, for instance, but its DNA profile is paramount,” João Pires MS, director of Wines, Food & Beverages, Altira Macau, City of Dreams Macau & Studio City Macau, commented. “And this DNA is always related to typical blackcurrant aroma profile, tannic edge, full-bodied rich style, spicy peppery hints and considerable length.”

Australia led the Masters category with three wines clinching the prestigious title. They were: Levantine Hill Estate Samantha’s Paddock Mélange Traditionnel 2013, a blend of Cabernet (81%), Merlot, Cabernet Franc and Petit Verdot from Yarra Valley; Taylors Wines The Visionary Cabernet Sauvignon 2013 and Wolf Blass Black Label Cabernet Shiraz Malbec 2012. The country has proven time and again that it’s capable of crafting masterful Cabernets that can command top market prices and indeed all three wines are in the HK$800+ (US$103) price range. The country’s warmer regions such as Coonawarra and Margaret River are established Cabernet sites. In addition, Clare Valley in South Australia is also shaping up to be a prime site for high quality Cabernet as seen in Taylors Wines’ The Visionary Cabernet Sauvignon, a 100% Cabernet that impressed the judges with its purity of fruit, texture and quality of tannins.

Moving inland to Chile’s neighbour – Argentina – it’s known that the Mendoza wine region is defined by Malbec; but as previously noted in our global Cabernet Sauvignon Masters competition, there’s been a surge of beautiful Cabernets made by producers there in recent years. This is also confirmed by our Asian masters results where Bodega Vistalba’s Tomero Cabernet Sauvignon, a pure expression of the red grape, was awarded a Gold medal. The result is extremely encouraging as this high performer only sells between HK$150 and HK$199, making it arguably the best value Gold medal winner among all the entries. 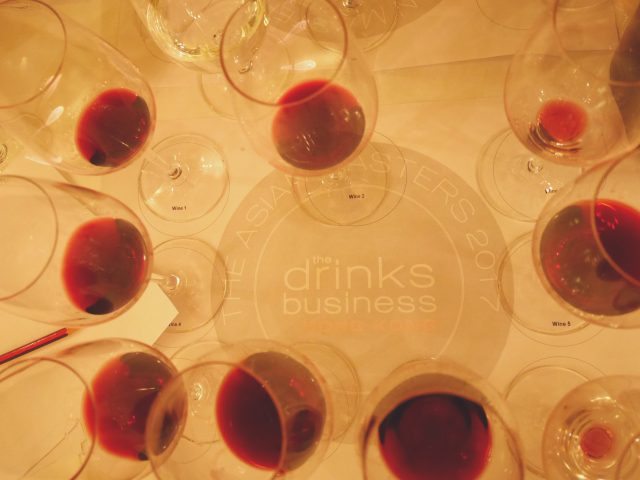 Throughout the competition when the wines’ identities were finally revealed, many judges’ jaws were left on the floor as lesser-known Cabernet samples from Israel’s Central Hills and Upper Galilee, Japan’s Yamanashi, China’s Shanxi province and the US’s Washington State not only stunned judges with their superb quality, but outperformed many of the traditional Cabernet strongholds in Australia and Chile.

The biggest surprise was a Japanese Cabernet from Suntory’s Tomi Winery located in Yamanashi to the southwest of Tokyo near Mount Fuji. The wine was unanimously given the ultimate accolade of a Master. Its fine-grained tannins, well executed texture and structure left a few judges convinced of its probable provenance from a top Bordeaux estate. Eric Desgouttes, general manager of Hong Kong’s leading wine merchant Kerry Wines, who gave out close to 100 points to this velvety and savoury red, said, on top of its typicity, its outstanding quality, “its minerality is really riveting. It’s truly a special wine”.

A Bordeaux blend red from China’s Chateau Rongzi in Xiangning County in Shanxi also nabbed a Gold, confirming that the Asian country can produce medal-worthy top reds. “It was quite a surprise that Japan and China are doing an exceptional job. Some of the judges like myself even guessed they were fine Bordeaux. That is a really big WOW, and I do think these wine regions really deserve a bit more attention, especially from a restaurant’s or sommelier’s point of view,” Wallace Lo, hotel sommelier of Park Lane Hong Kong, exclaimed after learning the where the wines were from.

Equally meriting the judges’ praise was a pure Cabernet from Chateau St. Michelle in Washington State. The wine impressed judges with its complexity, structure and fruitiness, in short, it’s a wine that “checks every box of quality Cabernet” Jennie Mack, managing director of Asia Wine Service & Education Centre, commented during assessment. Indeed, when talking about American Cabernet, much of the attention is turned and rightly so – onto Napa or Sonoma in California. Washington State has steadily emerged as a key Cabernet player in the past two to three years, however, to the extent that the grape has now become the region’s dominant grape variety.

Across the Atlantic ocean in the holy land of Israel, two wines – Altitude 624+ by one of the country’s largest wineries Barkan Vineyards in Upper Galilee and Gva’ot Winery from Shomron in Central Hills – sit comfortably in the privileged league of Gold medal winners. Cabernet, being one of the three most widely planted wine grapes in Israel along with Carignan and Merlot, provides a firm backbone either in blend or unblended versions as were seen in these two examples. Such is the power of this versatile and masculine grape variety. Both wines were high-scoring performers, and the Altitude 624+ wine seems to deliver much for its price in the HK$200-HK$299 range. 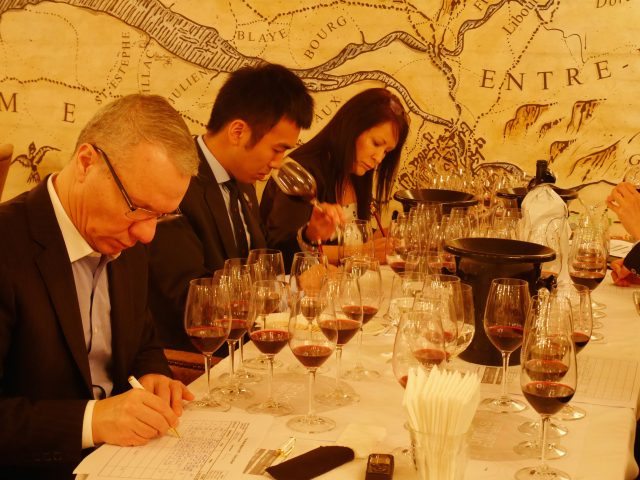 When it comes to winemaking techniques, it was evident that most of the Cabernet samples were well polished and true to their style, but there were a few instances of what the judges called ‘technical wines’, referring to wines that are clearly heavily influenced by human factors. It’s worth noting that technical wines are not faulty wines but rather more uniform expressions that seem as if they have been made to a ‘recipe’. But with excessive oak use or over extraction, the tannins are drying and coarse, giving an unpleasant sensation on the palate.

A few samples with high alcohol levels were not yet well integrated with quality fruit and lacked balance, a few judges pointed out. Wines with “well integrated with fine-grained tannin and a depth of finesse and elegance” in particular are what Wendy Chan, general manager of Wines & Spirits Division, Telford International Company Limited, was looking for when judging the samples.

The colour of most Cabernet samples was deep and luscious, varying on the spectrum from purple to dark ruby. This is a firm indication of the grape variety’s thick grape skin and its predominant dark fruit character. “Personally, I like to see good depth of colour,” added Nicholas, a factor he focused on when judging the wines.

Most of the wines are from recent vintages with the oldest being 2010. Freshness was generally found in nearly all the samples and the judges had a special liking for wines with lively freshness and vibrant acidity. “For me, herbaceousness is an integral part of Cabernet Sauvignon. It just depends on the level. The green bell pepper characters should sit behind and complement the fruit characters. The classic example is the Cru Classé Bordeaux where the herbaceousness sits well behind the fruit, oak and developing aromas and flavours,” commented Nicholas.

The Drinks Business Hong Kong Asian Masters Cabernet Sauvignon is the Asian edition of our successful global Masters series. A departure from traditional judging wines by region, the competition assesses wines purely by grape variety. Divided only by price bracket and, for ease of judging, whether the style was oaked or unoaked, the blind tasting format allowed wines to be judged without prejudice about their country of origin. Wines were scored out of 100, with those gaining over 95 points being awarded the top title of Master. Those earning over 90 points were given a Gold, those over 85 points a Silver and those over 80 points a Bronze. The wines were judged by an expert panel of nine judges including a Master Sommelier, Hong Kong’s top wine buyers and educators on 14 March at the historic Crown Wine Cellars. This report only features the medal winners.

Even more encouraging than the quality of Cabernet the judges discovered from New World countries was the unpretentious and approachable retail price points for these top wines, led by Chile in particular. Aside from the four Masters (all in the HK$800 price bracket), between HK$100 and HK$400 five wines picked up a Gold, of which three –unsurprisingly – are from Chile.

Even moving to lower-price brackets below HK$100, it is clear there are some great producers really pushing the envelope to challenge profit margins and quality to produce three Silver medal-wines that were well balanced, pleasant and honest Cabernets. They were Viña I Wines, Palo Alto and Veramonte, not to mention the other Silver medals Chile bagged in the HK$100 to HK$200 range.

“Below HK$300, there were quite a lot of Silvers and even Golds, but between HK$400 and HK$800 it was quite difficult because there was a lot of ambition in the wines, sometimes they get a little bit lost with what they are trying to achieve. Definitely some of the biggest surprises for lower price point wines there,” BBR’s Amanda Longworth commented.

Between HK$400 and HK$800, only three Golds were awarded as judges become increasingly conscious about the price tag in correlation to quality. They Golds went to; Stonestreet Estate Vineyards Cabernet Sauvignon 2013 from Alexander Valley, Viña Maipo Protegido Cabernet Sauvignon 2014 and Viña Ventisquero Enclave 2012.

This sentiment was echoed by Alan Liu, beverage and country store manager of The American Club in Hong Kong: “Some lower price point wines performed actually better and have better balance than higher price point wines. Also, the quality from New World countries is better than what I expect.”

However, when it comes to ultra-premium wines including the top performing Japanese and Chinese wines, their higher-than-normal retail price points could intimidate consumers (both were in the HK$800 or above range). “Japanese or Chinese wines are still a relatively new category. It will take a lot of time for them to get where Bordeaux is, if they actually get there. From a consumer’s point of view, they are not familiar with Chinese or Japanese wines, so for them to pay top price for the wine is going to be hard,” Pires added.

Click through the pages to see all the results